These are some of the donations made by Fundación Iberdrola España:

Iberdrola sends a new shipment of generators, tools, and electrical material to Ukraine

Iberdrola is helping Ukraine. The company has delivered to the country invaded by Russia electrical material that it had requested through European organizations. Basically, these are generators and electrical components valued at 53,000 euros.

In mid-March Iberdrola set out to comply with the request for electrical components made by Ukraine through Eurolectric and Aelec, European and national organizations comprising electricity companies. It had sent them a list of humanitarian needs for electrical equipment. The request had been made by the Ukrainians through the international organization Energy Community, of which the country is a member, and which collaborates with the European Commission to obtain material for its electrical system.

The list included the needs detected by the Ukrainian Ministry of Energy and the sectors for which the order would be destined. From i-DE, a subsidiary of Iberdrola in charge of electricity distribution, they contacted their usual logistics operator to make an economic and delivery estimate of some materials.

We finally decided to purchase the materials: two electric generators, one of 68KW and the other of 40KW; tools and pressure wrenches; 25 LED spotlights; 200 metal cutting discs; 200 units of glass insulators; 2,000 meters of cable and 1,000 liters of motor oil. In total, the amount of the material amounts to 53,000 euros, which has finally been paid by the Iberdrola Foundation.

The logistics department of the electricity company oversaw documenting the donation and coordinating the delivery. The final recipients of our aid were the company DTEK, the country’s electricity distributor for its various businesses (networks, coal, and generation). The Ukrainian Ministry of Energy itself has also received the motor oil.

Much of the selected material was ordered by DTEK. It is one of the largest distributors in Ukraine and is a member of EDSO, the association of European distributors, of which i-DE is also a member. In addition, DTEK had made an appeal for help directly to EDSO, of which Iberdrola was aware and was receptive to collaborate.

Once all the material had been prepared and received by Iberdrola’s logistics operator at the beginning of April, all the necessary documentary procedures were carried out through the Energy Community to deliver the goods. This entire operation was carried out in coordination with Cenem (National Emergency Center of the General Directorate of Civil Protection and Emergencies). Basically, it was a matter of managing the collection of the material from the warehouse located in the Madrid town of Meco where Iberdrola had left the material.

The company requested Energy Community to take charge of the EU collection and transportation of the material deposited in Meco to wherever they considered necessary to ensure its arrival at the indicated destination.

Cenem oversaw paying the 7,800 euros for the transport and ensuring that the packaging of the material was correct. It also provided the necessary instructions for its preparation and identification.

The material was picked up from Amara’s warehouse on April 25 and from there it was transported to Poland. On May 2, Energy Community informed Iberdrola that they had oral confirmation that the shipment had arrived in Kovel, Ukraine.

To date, Iberdrola has sent to Ukraine more than eight tons of humanitarian material donated by its employees through its corporate volunteer network in Spain. Among the necessities provided are first aid, orthopedic, hygienic and sanitary products, as well as shelter, food, warm clothes, blankets and quilts.

This initiative has been developed as part of the Volunteers for Ukraine program launched by the company since the beginning of the crisis. The company is also collecting funds, doubling the amounts donated by its employees. It has been delivered to the United Nations High Commissioner for Refugees (UNHCR) to provide shelter, immediate food and emergency care to the thousands of people who are leaving Ukraine and massing at the borders. The Iberdrola Foundation donated €1 million to UNHCR and Red Cross to support their work.

The company will also support Ukrainian refugees arriving in Spain through its Iberdrola volunteering action with refugees. Since 2015, this initiative has already assisted more than a thousand refugees from other war conflicts, such as Syria, Palestine, Afghanistan, or Mali.

Additionally, Iberdrola sent to Ukraine a first batch of 20 generators to maintain the operation of special services such as hospitals, shelters or water treatment plants.

Iberdrola’s volunteering program has been the only one by a Spanish company to be recognized as a pioneering practice by the United Nations in its report ‘Transforming Lives and Communities’, published in September 2021. This program was already awarded by IMPACT2030 with the 2018 Innovation Award in recognition of its innovative approaches to advancing the SDGs through its human capital.

Iberdrola, through its Foundation in Spain, maintains its support for the victims of the war in Ukraine and has just signed agreements with the Red Cross and the Spanish Committee of UNHCR to deliver 500,000 euros to each of these organizations working on various humanitarian aid programs.

Iberdrola announced this commitment during its participation in the event organized by Global Citizen through the Stand Up for Ukraine campaign, which has brought together activists and business leaders.

The President of the European Commission, Ursula von der Leyen, and the Canadian Prime Minister, Justin Trudeau, have collaborated in the organization of this event to support those who have had to flee their homes in Ukraine.

Global Citizen advocates solidarity with communities around the world facing major challenges such as war, poverty, climate injustice and inequality.

Iberdrola’s agreement with the Spanish Committee of UNHCR contemplates that the €500,000 donated by Fundación Iberdrola España will be used for the humanitarian assistance that this organization provides to people displaced by the humanitarian emergency both within and outside the country, ensuring that all of them have asylum and find safe refuge in another country. UNHCR, with a total of more than 250 staff in Ukraine and neighboring countries, provides assistance and protection to displaced persons and offers long-term solutions in host communities. In addition, it has recently contributed an inter-agency shipment of more than 10 tons of humanitarian assistance and has opened numerous registration centers for cash assistance in neighboring countries.

The agreement signed with the Red Cross, for a further 500,000 euros, is aimed at supporting the 18 projects that the organization already has in place for the initial care and medium- to long-term social integration of Ukrainian refugees. In Spain, more than 37,000 people have already been assisted throughout the country in this first month of conflict, and nearly 11,000 have been housed in resources managed by the Organization. To make this possible, it has mobilized close to 3,000 volunteers who are involved in logistics, translation, covering basic needs, legal information and child care, among other tasks.

Iberdrola, at the beginning of the war, already made itself available to the Central Administration to collaborate in a coordinated manner in this humanitarian crisis. A first batch of 20 electric generators was sent to maintain the operation of special services such as hospitals, shelters or water treatment plants.

Also through its Volunteers for Ukraine program, the company’s employees donated eight tons of humanitarian material that were sent to various logistics centers in Poland for use by the Ukrainian authorities.

Iberdrola has made its Innovation and Training Campus in San Agustín de Guadalix available to the central government to teach Spanish to refugees, as well as skills to facilitate their adaptation and integration into the labor market, paying special attention to women and minors.

Fundación Iberdrola España donates 7.000€ for training and quality of life support for the most vulnerable families in Fuerteventura - March 2022

Iberdrola is committed to improving the quality of life of people by supporting the most vulnerable groups and promoting their social inclusion in society to seek a better future. Fundación Iberdrola España collaborates with Fundación Canaria Centro de Atención a la Familia, a foundation that supports the most vulnerable families in the Canary Islands by resolving conflicts and improving communication within child-parent relationships. In addition, it offers guidance services to the people who attend the center and to the families of the children and adolescents.

Fundación Iberdrola wanted to collaborate with the “Lluvia Day Center” and its program of school support, training, guidance, and food for families at risk of social exclusion. The program aims to improve the quality of life of children and their families.

To this end, the center carries out various types of education: Education in responsibility, both in parents and children; education in healthy eating habits and the commitment to the importance of values such as tolerance, respect, and empathy towards others. As well as working on the empowerment and self-esteem of the people who participate in the program, cultivating emotional intelligence in a positive sense.

Since its creation, Iberdrola has been committed to the energy, cultural and social development of the communities in which it operates. In this regard, Fundación Iberdrola España represents a further step in this commitment by promoting initiatives that improve people’s quality of life.

In addition, Fundación Iberdrola España, through its Social Program, has allocated more than 11 million euros to social initiatives in the country and helped a total of 414,546 people. Since the launch of this Plan in 2010, the company has promoted more than 441 projects in collaboration with more than one hundred social entities, contributing to the fight against child poverty, school support, and the social integration of children, young people and women in vulnerable situations. The Social Program has enabled the creation of 1,630 jobs and counted with 7,648 volunteers. 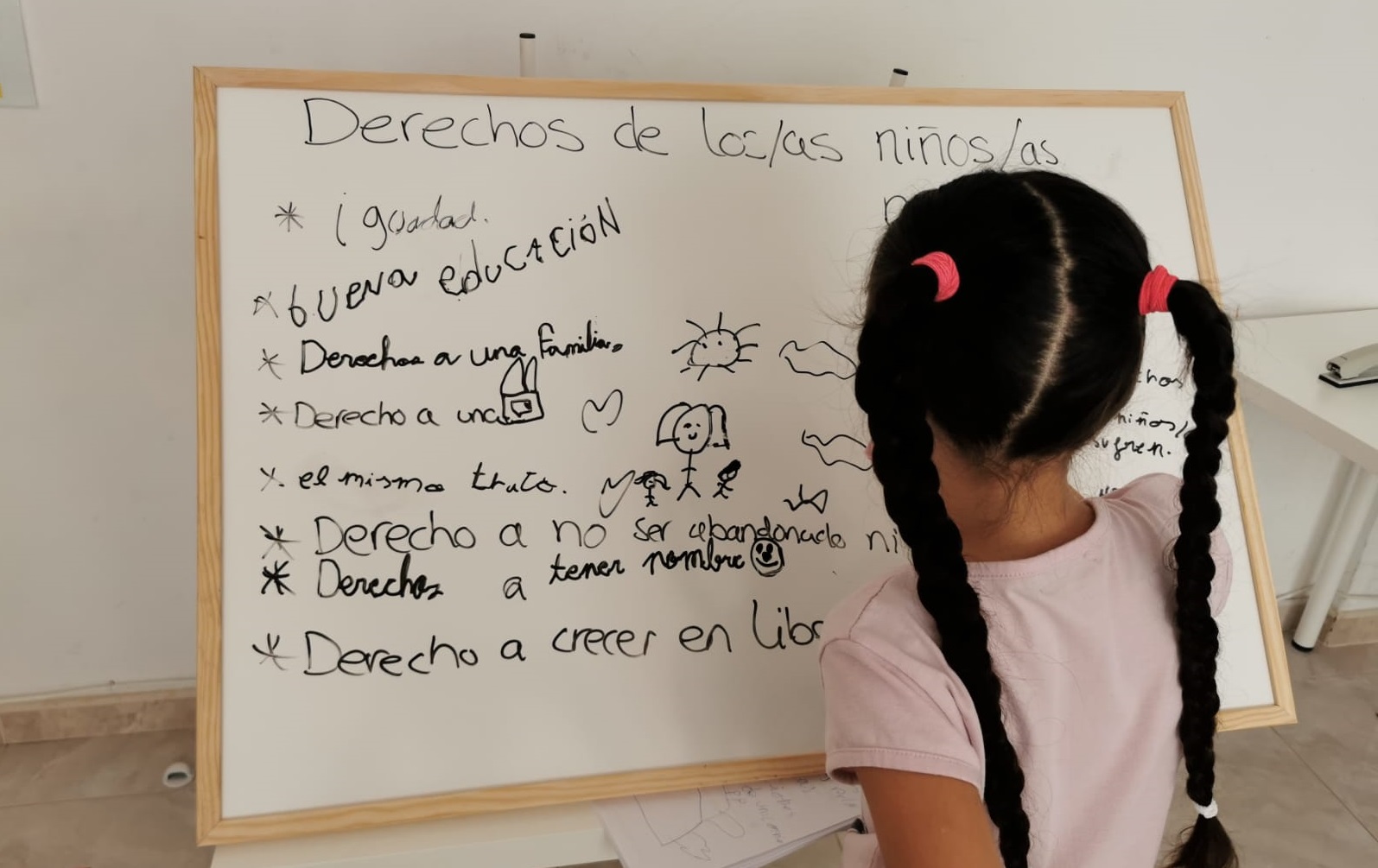