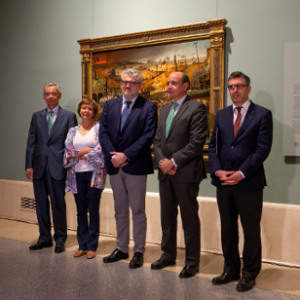 The intervention on this work has allowed to recover its structural stability, its true color, composition and pictorial technique of strong personality.

The intervention on this exceptional work, made by Mª Antonia López de Asiain (pictorial layer) and José de la Fuente (support), has allowed to recover its structural stability, its true color, composition and pictorial technique of strong personality that with precise movements of brush achieves transparency in the backgrounds and prodigious sharpness in the close-ups.

The work, from the Royal Collection, has been until 2011 – the date on which he entered the Museo del Prado The wine of the San Martín festival – the artist’s only painting that was preserved in Spain. It is a moralizing work that shows the triumph of Death over mundane things, reproducing a common theme in medieval literature and influenced by Bosch.

The four horizontal oak panels on which the work is painted were reduced, at an unknown time, to flatten and reinforce it with a seaming system that prevented any natural movement of the wood.

During the recess of the support to its current thickness, between 6 and 8 mm., The four panels that make up the work were separated and reassembled. In its adhesion the internal songs were brushed taking with it part of the painting, aggression that is noticeable especially in the elements and diagonal figures of the pictorial film. The union between the panels was not well leveled and to correct it, the surrounding areas were covered with stuccoes and repaints that hid part of the original. In this separation, in addition, the upper panel suffered an accident that caused several cracks from one end to another.

Given the state of conservation of the support, in this intervention has been removed the seaming to release the natural movement of the wood and have leveled the cracks and panels, reaching to separate the top panel to balance it correctly in the plane.

Once the restoration of cracks and joints has been completed, a secondary support has been built – a frame of beech wood – with the exact shape of the curvature that the work adopted once released from the seam to give it stability while respecting its hygroscopic movements.

The method used to join the frame with the paint is a system of flat springs of stainless steel, glued to the support by golden brass buttons reversibly. These springs are inserted in nylon screws that allow any movement in 360o of traction, dilation and contraction within the plane.

The painting, conscientious from its conception in drawing to the final profiling of the details, was hidden under a large amount of repaints of different restorations that, later, were masked by colored varnishes to provide unity, completely transforming its image into ocher, almost monochrome .

The work has required a complete cleaning that has been hampered by the subtlety of the original layer of paint compared to the thickness and hardness of the repaints. Withdrawing the general repaint has removed the warm veil added by previous restorations and details of original paint previously hidden have been discovered. It has undergone a change of general tonality, recovering the clear blue and red tones that characterize it, and the complexity of its composition and the depth of the landscape has been restored.

Thanks to the support of infrared reflectography and copies made by children of the author using the same cardboard, it has been possible the correct reintegration of small lost elements invented in previous treatments with a wrong reconstruction.