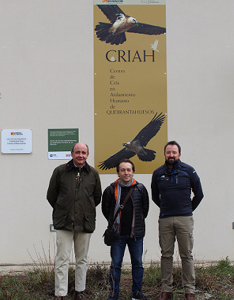 A project to recover the bearded vulture species

We worked with the Fundación Para la Conservación del Quebrantahuesos (FCQ) (Bearded Vulture Conservation Trust) on the Recovery of the Bearded Vulture on the Picos de Europa National Park project.

The initiative, based on a cooperation agreement between the Spanish Ministry of the Environment and thirteen autonomous regions, aims to conserve the bearded vulture (Gypaetus barbatus). This carrion-eater has declined so seriously in numbers that it is now an endangered species. Its only viable habitats are the Pyrenees, with two small isolated populations on the islands of Corsica and Crete.

Creation of a new breeding ground

Specimens have been released in the Picos de Europa National Park to boost the natural population in this Cantabrian mountain range. The aim is, in the medium term, to create a new stable breeding habitat outside the Pyrenees thus reducing the risk of extinction. It also encourages the species’ connectivity, re-establishing the Iberian population of the Natura 2000 Network, which is the colonisation front for the bearded vulture in the north of the Iberian Peninsula.

The most innovative initiative to be carried out within the context of this project is the study of the effect of Climate Change on the prevalence and morbidity of diseases transmitted by biological agents in the bearded vulture population in the Central Pyrenees. The findings of this study are expected to provide valuable information on the future of this species in the short and medium terms.